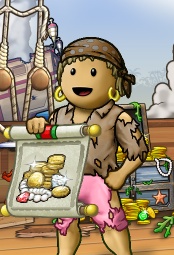 Ygvb is a pirate on the Viridian Ocean.

Ygvb lives in the Viridian Ocean, on Sakejima Island. He is a senior officer in the crew, the 'Ultimate Imperials', and a member of the flag, 'Imperial Madness'. Ygvb enjoys entering contests and competitions, and he has won three honorable mentions in the "Easter Easel 2009" competitions on the forums. Ygvb also won a renamed sloop, the 'Destructive Shark', in the Vanguard Egg Hunt event. He doesn't like pillaging much, but will go on flotillas and blockades as much as he can. He also often sells and buys things to make some extra PoE when he doesn't feel like a pillage. Ygvb no longer plays because he lost his baglah due to a scammer and due to no rules against scamming.

Retrieved from "https://puzzlepirates.fandom.com/wiki/Ygvb?oldid=44856"
Community content is available under CC-BY-SA unless otherwise noted.