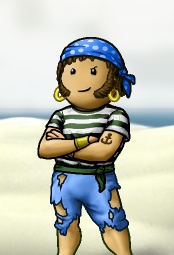 Outspoken was once a pirate on the Sage Ocean. He was a pirate in the crew The Shooting Stars of Sage. Soon to be a pirate, he loved to Sea Monster Hunt and pillage with the navy. His character has since gone dormant, or has been deleted.

Outspoken was originally named Demdond. He was a fleet officer of The Remnant, under the flag Critical Mass. He loved his crew, his friends and his account. After going inactive for a few months he came back to find that his account had been deleted. He was upset, as he worked very hard on that account. Demdond made a new account, and he called his first pirate Outspoken.

After being unable to access the internet for a very long time Outspoken returned to PuzzlePirates knowing his account would no longer be there. He started a new in May, 2010. His pirates name? Rupture.

Demdond had many good close friends, but after the account deletion he had a hard time tracking some of them down. He found a few, but was still searching for others, including his old captain. A few of his friends included Silverazor, Thaliana, Fattyhaha and Fivestars..

Arr! This article about a pirate in Puzzle Pirates be a stub. Ye can help YPPedia by expanding it.

Retrieved from "https://puzzlepirates.fandom.com/wiki/Outspoken?oldid=112271"
Community content is available under CC-BY-SA unless otherwise noted.