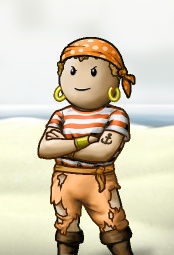 Aljay was a fleet officer of the crew Spirit of the Lord and a member of the flag Sword-of-Light on the Hunter Ocean. His piratey life began on August 18, 2006, in the number one crew, -Epic-, which flew the flag of Varsity. He played on all the oceans but he mostly lived on the Hunter Ocean.

When Opal came out he tried playing on it for the cheap doubloons but since he couldn't understand anything they were saying he had a big problem so he didn't log onto Opal since the day it came out. He played on Viridian the second most because he had a lot of PoE on it.

Aljay no longer sails the oceans, and his pirate is now deleted.

Retrieved from "https://puzzlepirates.fandom.com/wiki/Aljay?oldid=35068"
Community content is available under CC-BY-SA unless otherwise noted.